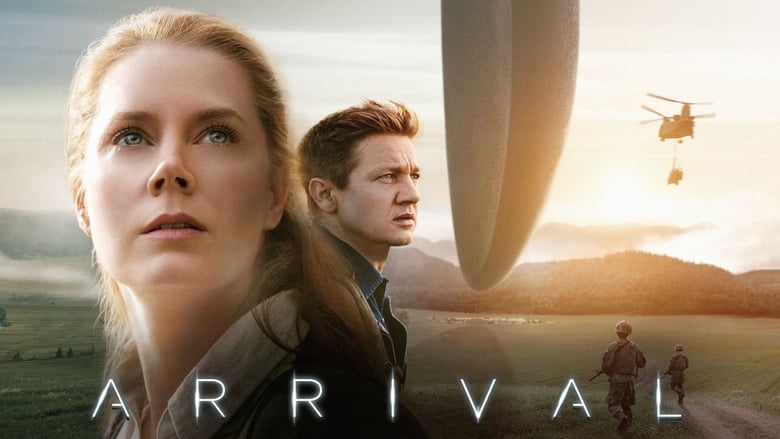 Arrival is unlike any other film I’ve seen in the cinema over the past few years. It talks about topics such as the language, humanity reaction to extraterrestrial beings, our perception of time and space, in that order. It’s as if frequent discussions that take in the modern era have been rolled into one incredible experience. This is filmmaking at it’s finest, inspired by the most important part of philosophy, which is to ask, instead of forcefully trying to find an answer.

The beginning is slow. Amy Adams plays a linguist professor named Louis Banks, who seems to live a life of solitude after losing her daughter. During one of her lectures, the aliens arrive, and panic ensues. Her eyes look out into the blurry sky, and the news broadcasts are hardly bright enough to even wash away a tiny portion of the fog. Eventually, she is recruited into a team that is working on interpreting the alien’s speech. Up to this point, not much happens. A lot chewing and slurping could be heard, and I understand why.

Then she enters one of the twelve alien ships that have landed on Earth, with a new companion named Ian Donnelly, a theoretical physicist (played by Jeremy Renner), and everything changes. Banks and co. enter a small opening on a lift. The lift stops at a point where there is no longer a way to distinguish up from down, and where gravity is irrelevant. From here on it’s a constant path up, to moments so ambitious and yet so resonant. So different from us, and yet so human.

Unlike other science fiction films, Arrival is celebrates the importance of language. Thankfully (because I loathe math), there is absolutely no pseudo scientific mumbo-jumbo, and the objective is clear: expand the aliens’ vocabulary of the English language so that the characters can ask why they have come to Earth. To my surprise, Donnelly the physicist and Banks the linguist get along well in the film. Their chemistry is great, and works out for the surprise reveal that takes place later on, when things start to get mind-blowing.

The B-story, consisting of skeptical worldwide leaders and high-ranking officials, is equally clear in why they decide to go on with certain action. I felt like these are decisions that are reasonable from men of such position, and provide good turning points and conflicts that meet with the main story, giving the film a pace and preventing in from falling into the giant pit where Interstellar got sucked into, much like the black hole McConaughey’s crew was trying to avoid. This is Arrival’s main tour de force - the ability to hook cinephiles with Tarkovsky and Bergman-like imagery while maintaining a compelling mainstream plot.

However, the linear storyline is abandoned during the third act, and Arrival becomes the masterpiece I’ve been looking for. Without spoilers, all I can say that it is thought-provoking, heart-breaking, and phenomenal montages of life as we know and don’t know it. I predict a lot of people to have been thrown off by this sudden change, but what I see is brilliancy. Arrival shifts momentum so fluidly that is reminds me of skilled chess players, who begin an attack on the opposite side during the mid to late game, where the opponent’s pieces are the most vulnerable. We the vulnerable audience are attacked with an immense blow of sound and imagery. Denis Villeneuve is no doubt the Bobby Fischer of filmmaking. Speaking of Mr. Villeneuve, he definitely wins the ‘rising’ director award for 2016, surpassing Chazelle’s La La Land in my opinion. I’ve yet to see Moonlight or Manchester, but this is my pick for the best of film of the year.

After having finished the movie, I rode the bus back home, heart still pounding, and wrote this review in a flash. I haven’t written a full-length review in a long time, and boy was it a lot of fun. Thanks to Raul for having indirectly introduced me to Arrival through his movie long thread.