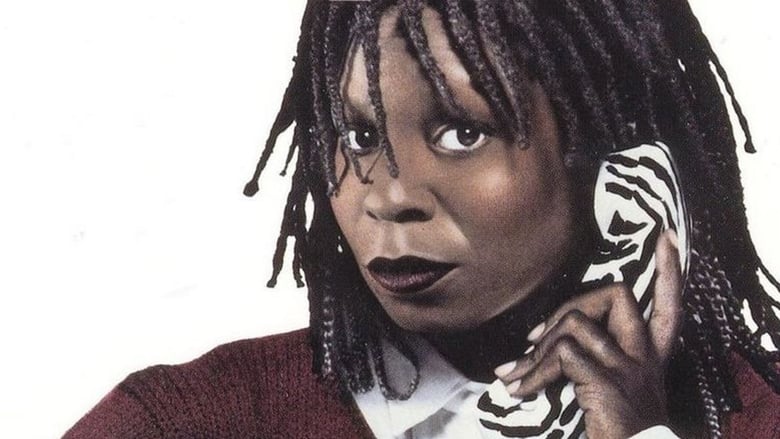 Directed by Rip Torn
Released in 1988
Starring Whoopi Goldberg as Vashti Blue, Amy Wright as Honey Boxe, the Irate Neighbor and Jennifer on the Answering Machine, Elliott Gould as Rodney, Severn Darden as Max, John Heard as the Telephone Man and Wookie the Owl and Marshall the Owl as Bert the Owl

If Yoko Ono and a Sexy Celebrity thread had a baby, it would probably be Whoopi Goldberg's bastard child of a film, The Telephone. I'm not kidding when I say this is a bastard child -- Whoopi herself wanted nothing to do with this film. She took the producers of this movie, New World Pictures, to court and tried to sue them to prevent this film from being released. When she lost her case and the film was ultimately released, it made about $100,000 -- and that's A LOT for a movie like this. People fled the theaters, screaming for their money back, or they prayed that the film would break. Apparently it fared better when it was released on video. I remember that video. I rented it in the mid-to-late 1990's when I was a youngin' because the cover and the title always fascinated me. What was this Whoopi Goldberg movie I had never seen where she's talking on a zebra striped phone? It SCREAMED me.

Well, when I finally watched it... I was gobsmacked.

And I must warn you -- I'm going to SPOIL the ending as I continue on with this review. There's a twist ending, one I don't think I saw coming back then (although, I think the person I watched it with guessed the ending before it came, unless I'm just imagining that -- been too long ago). I kind of think you NEED to know the ending to really enjoy the film. Let me explain why.......

The film is about 80 minutes of nothing but Whoopi Goldberg acting INSANE inside her little dump of an apartment that's next to the freeway. And I mean that -- we NEVER get out of the apartment.

Her biggest co-star is an OWL. Yes, an owl. Named Bert. Played by Wookie and Marshall, both owls. Wookie, Whoopi and Marshall.

The other people in the movie -- you can count them all on one hand -- are barely in the movie. And I mean BARELY. I've list them all above with the cast, except for a saxophone player and two street vendors, who aren't that important (for this movie). Severn Darden (whatever kind of name that is) has MAYBE a minute of screen time during the opening credits. Probably more like 30 seconds. Elliott Gould has maybe 5 minutes. Amy Wright has the most, but you only see her onscreen for the same amount of time as Elliott Gould. The rest of the time she only appears as a DIFFERENT CHARACTER -- an irate Asian-sounding neighbor you don't see, who hates Whoopi Goldberg's character, who wants to call the SUPER on her and have her evicted, and who gets pissed when the electricity goes out, her Wheel of Fortune along with it. She's also apparently "Jennifer on the Answering Machine", another voice, though one I don't even remember hearing. And then there's John Heard, who appears at the very end of the movie, maybe 5 minutes, maybe 3.

The rest of the film is Whoopi Goldberg and her pet owl -- and a goldfish, I forgot about the goldfish.

What does she do? She talks on a zebra striped phone to her friend Jennifer (never heard, only on the answering machine, and I don't remember the message). She also talks to a lot of other random people she calls up, including a cop. All of them are not interested in her, it sounds. Jennifer seems to like her.

She also reads from Shakespeare, very theatrically -- she's an out-of-work actress, of Shakespeare caliber. She dons a red hat and pretends to be a Japanese chef. She wears a cowboy hat and pulls down her pants after exiting her tiny bathroom, then walks over to the wall/double door thingie that separates her apartment from the irate Asian-sounding neighbor lady who also plays a blonde bombshell named Honey Boxe and Jennifer on the answering machine -- she bugs the neighbor lady. She.... gets visited by her ex-agent, a sleazy scumbag type who looks like he still lives in the 1970's. She makes more calls. She listens to her answering machine. She gets a visit from John Heard, the telephone man. 80 minutes.

It is more insane than it sounds.

BUT -- like I said -- there's a twist ending -- and I am going to reveal it now. It surprised me the first time I saw it, I think, but now as I watch the movie, it seems WAY obvious.

You see, not only does The Telephone feature all of the above.... but it is also a beta test version of Fight Club... starring Whoopi Goldberg.

If you haven't already guessed it from the review.... like I said, Whoopi's insane. LITERALLY.

She ain't talkin' to anybody on the damn telephone.

Her telephone was disconnected. MONTHS AGO. So we learn from John Heard, the telephone man, when he arrives to collect her zebra striped phone, which he says looks like a phone sex phone.

And suddenly, this completely random, totally insane movie.... that might bore you to death, whether you know the ending that's coming or not.... makes more sense. Sort of. It at least gives it a purpose.

It's a movie about a woman who's totally lost her mind. It's Whoopi with a mental illness. Schizophrenia, I assume. It is a feature length film that basically gives us a "fly on the wall" point of view of a basketcase living by herself, after she's lost her mind.

What happened to her? Some think she was just a lonely woman. We hear about Larry, her ex-boyfriend (ex-husband?), who left her. Whoopi's character, VASHTI BLUE, brings him up a lot. She says he's on her mind and she can't get him off of it. Maybe he left her and she just snapped.

So as you're watching this movie, and you're watching endless scenes of Whoopi Goldberg talking on the telephone.... there's nobody on the other end. Nobody's listening to her. It makes you think. Is this a routine she's developed and been acting out EVERY DAY for a long time now? She's marking down something on her kitchen wall -- it appears to be based on traffic accidents outside her apartment, but maybe she's marking down the days she's been crazy.

I'm at a point now where I'm not even sure if the OTHER CHARACTERS that we see are even real. Could they be delusions? Could the owl be a delusion? The telephone man himself? This movie is so crazy IT MAKES YOU THINK CRAZY! I don't really think the other characters are, like, schizophrenic hallucinations.... but who knows? Maybe the irate neighbor behind the wall is just an auditory hallucination. Maybe we're seeing inside her crazy mind. Who knows WHAT THE F**K this movie really is. Is she even a black woman in an apartment? Or a schizophrenic space alien in a mental hospital? It makes one wonder.

Bad reviews are the norm for this Telephone movie. I do believe it's a bad movie. I don't know if I can recommend it. But I must say -- I have seen much worse. And this film is definitely one-of-a-kind. I very much like what they attempted to do. My favorite scene is where Whoopi drives the irate neighbor crazy by loudly playing "One Love" by Bob Marley as she dances around her apartment.

There's a Christmas tree in her apartment, so I kinda think of The Telephone as a weird Christmas movie, even though apparently Christmas is actually LONG over in the film, so says the Telephone Man played by John Heard.

You can see it if you're curious, or you can just know the film from my review. Diehard Whoopi fans have GOT to see it. I wish it had actually got more respect. I wish Whoopi hadn't tried to sue the producers and prevent its release (even though I understand why she did). I hope my review gets out there and helps give the film a little more positive exposure.

Look out for a brief moment of the Christopher Young score for Hellraiser, which plays on an old movie on Vashti Blue's television set.

*hangs up the telephone*