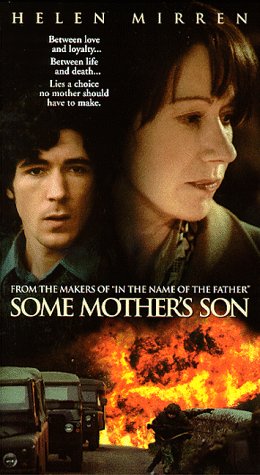 
I had the opportunity to watch Some Mother’s Son recently and can only describe it as stunning… and as before, I am not a reviewer, so please bear with me…

Some Mother’s Son is based on the true story of the Irish Republican Army prisoners in Belfast’s Maze Prison who went on a hunger strike in 1981 to protest British prime minister Margaret Thatcher’s “Northern Ireland Solution” which comprised three main principals -- Isolation, Criminalization, and Demoralization. Imprisoned IRA members who, before, had been treated as prisoners of war, were to be treated as criminals instead and prison officials were ordered to break their morale.

In early 1981, IRA prisoners had numerous privileges stripped from them, including the right to wear their personal clothing and were ordered to wear prison uniforms. The prisoners, claiming they were political prisoners and not common criminals, refused, wrapping themselves in blankets instead… a move that prompted the British to deny the unclothed men bathroom privileges. Determined not to give in, the prisoners began urinating under their doors and smearing their excrement on the walls of their cells… bringing things to a standstill on both sides… So, in March of 1981, IRA prisoner, Bobby Sands (played by John Lynch), began a hunger strike, stating that if imprisoned IRA members were given back their status as “prisoners of war”, the strike would end. In the beginning, other IRA prisoners wanted to join Sands in the hunger strike, but he made them promise to wait at least two weeks in the hope the demands would be met, thus sparing the others.

In Some Mother’s Son, we are told Bobby’s story, as well as other IRA prisoners, through the eyes of two fictitious mothers and their sons… Kathleen Quigley (Helen Mirren), a pacifist who was unaware her son, Gerald (Aidan Gillen), was even involved in the IRA until he was arrested and Annie Higgins (Fionnula Flanagan), a staunch supporter of the IRA who views her son, Frank (David O'Hara), as a hero for “the cause”…. and even though there is a lot of information in this film about the political problems in Northern Ireland in the early 80’s, the main focus centers around the bond that develops between these two mothers with such differing views… and in the end, boils down to just one question… is their sons convictions worth their lives…