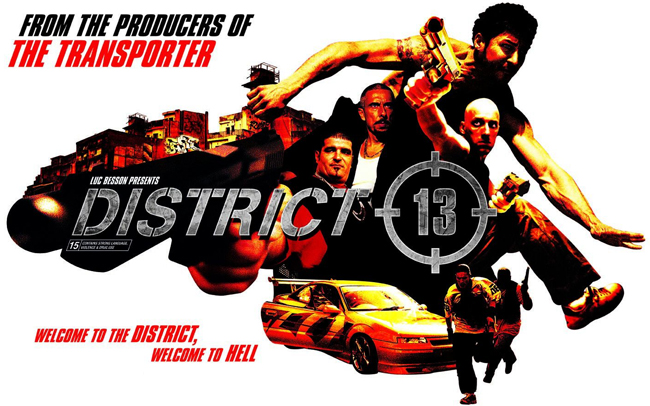 
In a ghetto district blocked off from the rest of Paris by its enormous and encompassing concrete walls, the leader of a notorious drug-running gang get his hands on a nuclear bomb that threatens the safety of the entire city. In order to retrieve the weapon, an undercover cop has to team-up with a local resident looking to rescue his sister, who has previously been taken hostage by the gang as revenge for the brother's interference in their drug operation. While District 13 plays this set-up fairly straight, it doesn't take itself too seriously overall, and has a number of comedic moments to balance the otherwise foreboding nature of a plot involving a nuclear bomb.

The plot isn't particularly unique or even all that interesting, and the dynamic between the two lead characters, Leīto and Damien, is certainly something we've seen done before, but District 13's story and characters take a back seat to the action, and the film really shines whenever it really gets into motion. Despite their occasional absurdity, the action and chase sequences in B13 were performed pretty much as-is without the assistance of wires of green screens. And as you would expect from the founding father of parkour, these stunt performances are absolutely amazing to watch.

The director of B13 was the cinematographer for The Transporter (2002), Unleashed (2005), as well as Taken (2008), and B13 certainly has a similar look and feel to those movies, even with someone else directing the photography for this film. I love when action movies aren't afraid of warm colours, so the visuals in B13 really stand out against similar films that overly commit to the bleakness of dystopian settings. And for a film where the two main characters are played by stuntmen, the acting in District B13 is actually really good. While their rivalry is a little cliché, Leīto and Damien have decent chemistry on screen and work well together, so I'm willing to forgive their stereotypical behaviour.

I first saw B13 about 10 or 11 years ago and have watched it a couple times since then, yet to this day even simple sequences, like when Leīto jumps through a narrow glass window atop a door frame, never fail to impress me. Belle and Raffaelli succeed in daunting feats of athleticism that are a joy to watch regardless as to what you think of the plot, and even though the most impressive action scenes take place earlier in the film, there is more than enough residual kinetic energy to see the movie through to the end credits.

Do you like parkour and movies like Escape from New York? Then check
out District B13, but avoid both the sequel and the Canadian remake.