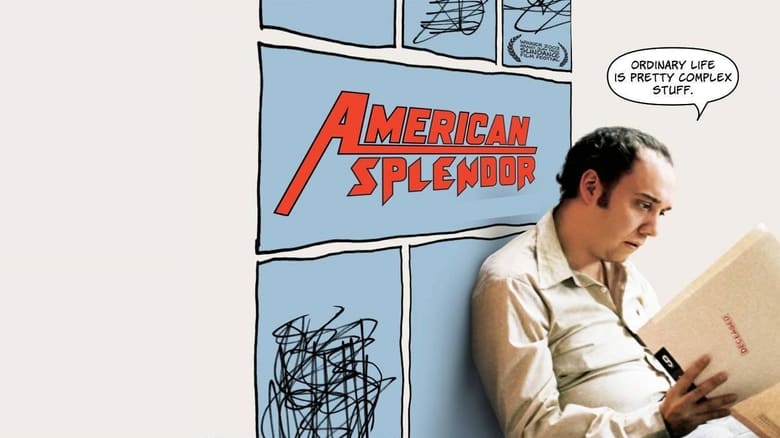 Based on the Comic Book Series "American Splendor" by Harvey Pekar and
"Our Cancer Year" by Joyce Brabner.

American Splendor is a very brilliant, smart film. Definately one of the best of 2003. The film is based on the Comic book series by Harvey Pekar. This was the best screenplay of last year, and I was very dissapointed it did not win the Academy Award for it. The screenplay is only one of the many reasons I loved this movie, the other being the actors, including the great Paul Giamatti. He's always great, even in some bad films (Big Fat Liar). His transformation of Harvey Pekar was brilliant, he both acted and sounded like the real Harvey, who makes appearences in the film as himself. Another reason being why I loved this film so much was it's documentary/motion picture style, it would go from a scene from the film, to a documentary style interview with the real life Harvey Pekar. This was Paul Giamatti's best performance and definately the best performance of 2003. I was very mad over the fact he did not get a nomination for it here.

The story begins in the year 1958, when Harvey is a little boy. He's out trick-or-treating with other boys, but the problem is he's not in a costume. When not given candy he walks off and says one of the funniest lines in the film: "Man, why do people have to be so stupid." From here we go to Harvey as an Adult, with a hoarse voice, having relationship problems. During this time of his problems, one of his friends R. Crumb becomes a comic book artist and becomes quite famous. This persues Harvey to do something else instead of his clerk filing job at a local hospital. He then decides to make a comic named American Splendor about the real troubles in life, for example: Losing your keys.

Paul Giamatti plays this role perfectly. While watching this film, I was very impressed with his performance. But I have to give alot of credit to another reason why the film was great. Judah Friedlander playing the very funny Toby Radloff. Toby was Harvey's best friend, he was the funniest person in the film. Some people thought he might of played Toby a bit over the top, but once you see the real Toby talking, you know he's playing this role just perfectly. The funniest scene in the film in my opinion is a scene where Toby tells Harvey he's driving many miles to see a film, he tells Harvey this film was inspiring, and when he said the name of the movie, I just couldn't stop laughing. That was one of the funniest scene's I've seen in film history.

Harvey is having troubles with his comic, not with the story, but with the illistrations, he puts it this way: "I can't even draw a straight line." But appearently, his fellow friend R. Crumb who was also a comic book artist liked his style and agreed to illistrate it. From here we meet Joyce Brabner (played by Hope Davis very well), a women who thinks there are very little comic stores at her town, so decides to start her own. She loved the American Splendor series, but misplaced a copy and every other one was sold out, so decides to write a letter to Harvey. They have a letter writing relationship until they finally decide to meet and go on a date.

Harvey would write stories about his real life in the American Splendor comics. He would write about his friends, about his life, about people from the hospital who are also clerks, and Joyce. This film is also based on the comic by Joyce Brabner, Our Cancer Year, when Joyce documented everything that happened during the year Harvey had cancer in his testical. Harvey doesn't write about fiction things. He writes about true life, for example: about real arguments we would have. Not arguments on something fictional. Pekar writes about real things we do, people we hate, things we enjoy, conversations like real people would have, etc.

Harvey made many appearences in The David Letterman Show in the 1980's, he knew they were only calling him back to get some ratings. Harvey just didn't want to be on the David Letterman show anymore, so he did something on his final appearence and went a little too far. Dave then wispered into his ear during the commercial break: "You blew a good thing." Some of these appearences we see with Letterman are real footage, but there is a re-creation of his final show where Harvey insults Letterman and NBC. Shari Spinger Berman and Robert Pulcini tried to get this footage but couldn't. The scene where he makes his final appearence was very funny, and we don't really believe this happened, but it did. Harvey didn't care "he blew a good thing" as Letterman said, he only did what he believed in.

What we learn from this film is that Harvey is a real person, and acts like a real person, just like each and every single one of us. And Berman and Pulcini show us this person in a very fascinating way. They both did a fantastic job in the writing and the direction of the film.