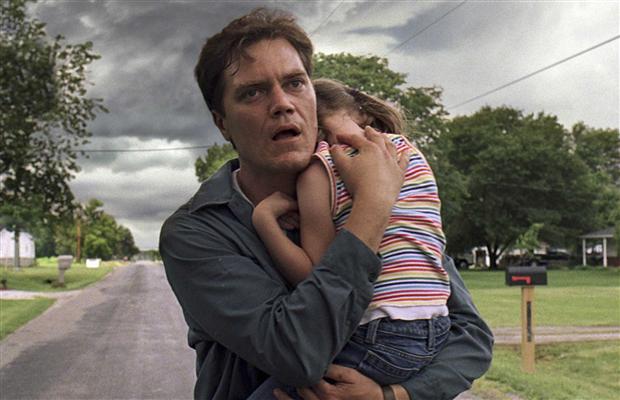 This is a modern-day psychological drama which also touches on apocalyptic imagery, expertly directed, acted and constructed with some breathtaking visuals, all accomplished on an apparent budget of only one million dollars. Michael Shannon plays Ohio construction worker Curtis who begins to have visions, nightmares and hallucinations about imminent storms and violent attacks from people and even his trusty dog. This is quite unusual because he has a happy family with a loving wife (Jessica Chastain) and a young deaf daughter who's about to get some hearing implants, and he has no major problems with his life. As his sleeplessness and nightmares continue though, he becomes worried that he will follow in the footsteps of his mother (Kathy Baker) whose mental illness has confined her to assisted living for most of Curtis's life. Eventually, he decides to upgrade a tornado shelter in his yard, and this begins to tear apart his family, but Curtis is compelled to do it to save his family from what he feels is an impending storm or perhaps even something approaching the Apocalypse.

Shannon is his usual intense, brooding self, although for the most part, he seems to be a slow-burner and only seems to really explode in one community get-together. Jessica Chastain balances his personality well by being rational and caring although she does feel betrayed when he goes behind her back to take out a loan they cannot afford. But eventually the family proves strong enough to withstand whatever comes, although the ending of the film is open to interpretation and leaves Curtis's character unresolved as to whether he truly is insane, a prophet or someone in between. One thing I will say is that although Take Shelter has a few elements of horror and is certainly suspenseful, it's basically a serious character study and doesn't try to take any easy outs getting to its resolution and forcing the audience to believe one way or another. The fact that it can get away with what it does is a sign of a sure hand behind the camera in writer/director Jeff Nichols who made another good low-budget film with Shannon, Shotgun Stories, although this film seems to be a noticeable leap in overall quality.
» More about Take Shelter
» More reviews of Take Shelter
» More reviews by mark f