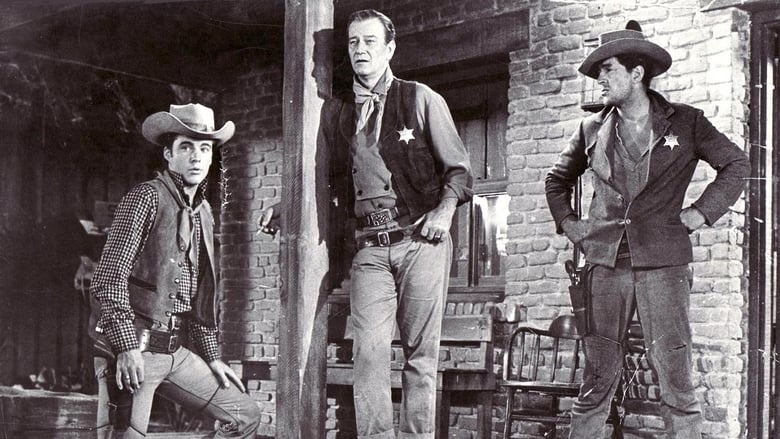 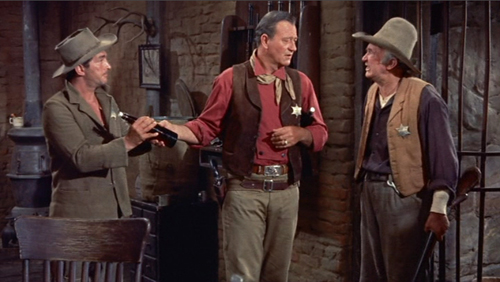 The sheriff in a small frontier town arrests a man for murder but soon has to contend with the man's brother planning to break him out.

Out of all the John Wayne movies I've seen, I'd say that Rio Bravo is probably the most out-and-out fun to watch. I'd still say that The Searchers is the best (and The Shootist is surprisingly great as well), but while those films are good, they tend to be largely dramatic affairs where any comic elements serve to provide the levity necessary to preventing the films in question becoming too dark and miserable. Rio Bravo deftly avoids this, though it's not without its fair share of weight underneath its simple narrative. Wayne plays the sheriff of a Texas town who arrests a man (Claude Akins) for murder in the film's opening sequence. The plan is to hold * in the town's jail and wait for the U.S. marshals to cart him off to prison. Unfortunately, it turns out that the man's brother (John Russell) is the unfortunate combination of vindictive and wealthy; he has a plan to spring his brother from jail and, while he's not quite willing to outright murder Wayne, he's still willing to try every trick in the book to get his brother back. Wayne's attempts to maintain the peace in the face of this conflict are complicated by the fact that he has only two deputies, an old man with a limp (Walter Brennan) and the town drunk (Dean Martin). This provides enough conflict on its own, but where Rio Bravo excels is in is filling its considerable running time (roughly two hours and twenty minutes) with anything and everything that can help the film rise above its basic premise.

One of the most memorable things I've heard about Rio Bravo came from superfan Quentin Tarantino, who praised it as one of his favourite films because of how the strength of its characterisation created a film that proved endlessly rewatchable as a result. While actors as famous as Wayne or Martin don't exactly disappear into their characters, that doesn't make them any less watchable. Wayne provides an appropriate mix of taciturn authority and comical camaraderie underneath his trademark mannerisms, while Martin makes for one of the film's stand-out performances as the alcoholic deputy who is struggling to overcome his personal demons in order to help out Wayne. This is a very believable character arc and Martin spends much of the film avoiding his charming Rat Pack persona as he plays a man who is convinced that he doesn't deserve a second chance even when he gets one. The other obvious stand-out is Brennan, who has the most overtly comical role as the grouchy old deputy whose slowness results in Wayne making him Akins' guard for pretty much the entire film. His high-pitched voice and garbled dialogue may be filling a familiar Western stereotype, but he does it to perfection and becomes the ideal comic relief with his fast-paced one-liners. Veteran character actor Ward Bond shows up as a wagon driver who is a close friend of Wayne's while pretty-boy singer-actor Ricky Nelson delivers a good performance as one of Bond's employees who turns out to be pretty good with a gun and joins Wayne's cause soon enough. In the middle of all this machismo, Angie Dickinson plays a resident of the local hotel who has a chequered past and naturally acts flirtatious towards Wayne despite the obvious age difference and Wayne's belligerent resistance to her advances. It could have been an unforgiving role but Dickinson makes it work rather well.

The characterisation is easily Rio Bravo's greatest strength, but that doesn't mean that the rest of it isn't solid as well. The writing is well-done, pacing out the action with various well-timed moments of interpersonal conflict. The dialogue in particular is cleverly crafted with every character being capable of shooting off snappy one-liners or heartfelt allusions to their inner complexities. Veteran director Hawks knows how to shoot scenes with an eye for what is necessary, be it sharp exchanges or suspenseful pursuits. The music is pretty standard given the genre and era, though it's a credit to this film that the inevitable singing sequence between Martin and Nelson comes off as natural and plot-relevant rather than a cheesy momentum-killing nod to the duo's most famous talents. Hawks doesn't skimp on the action, manufacturing careful moments of suspense (such as the scene where Wayne and Martin follow a murder suspect into the local bad-guy bar) and action (the film's very taut and explosive finale). The various elements combine to make Rio Bravo one of the most utterly charming old-school Westerns to ever exist where even the most dated or difficult elements (such as Wayne and Dickinson's romantic sub-plot or the film stopping dead to have not one but two songs) only add to what makes the film fun rather than make it seem hokey. Though I've had some issues with Wayne films in the past, this is a film that manages to not only avoid a lot of my usual problems with the man but also makes for a very watchable adventure in the process.