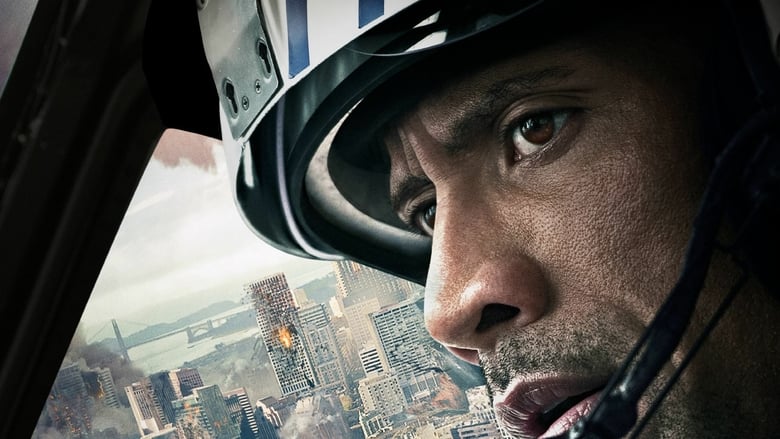 The disaster movie handbook played out like a bad pantomime, that's San Andreas. One giant and unlikely cliche. First we see Dwayne "The Rock" Johnson, a reckless helicopter pilot with huge guns and an incredibly versatile skill set, saving a stupid woman from her car and a highly questionable cgi set piece. So as you already know, a huge earthquake is going to hit California, and it's up to The Rock to save the day. The natural and inevitable cliche is present, namely the fact that The Rock is divorced and still in love his wife, and gets the opportunity to win her back by saving the population of the west coast. He also has a really hot daughter, the movements within whose bra were simply mesmerizing, and the films only highlight.

The Rock first goes on a mission to save his wife from a skyscraper. She is, like her children, very lucky indeed. Having survived the internal collapse of the building, and after spending five minutes screaming and running around aimlessly, she somehow climbs onto the roof and signals The Rock to fly his chopper in.This is a very lucky family indeed. They survive being buried under a huge building, drowning, helicopter crashes and much more. There's also The Rock's skill set: He can fly choppers, planes, drive boats, knows practically everything, and saves around 5 million people simply by harnessing the awesome power of his tight grey t-shirt and huge sweaty muscles.

The film was bound to have a scientist know it all, and in this case it was Paul Giamatti's turn to play the egghead. He spent most of the film sat in front of a back of tv monitors looking constipated and stating the obvious, whilst flirting with his assistant. Everything in the film just felt familiar, like a condensed omnibus of the last 20 years disaster movies. Not to mention a lot of stolen one-liners as well. Eventually, The Rock's daughter and two token characters take refuge in a half- built and unsafe building.The daughter inevitably finds an excuse to give her boobs some air, when she rips her top off to make a bandage, followed by some gratuitous underwater wobbly boob shots.

After their skydiving excursion, The Rock and his wife ride a 500 foot tsunami wave into the heart of the city and luckily enough turn up right outside the building his daughter is in ..Anyway, he pumps some sea water out off his daughter's ample chest, lets out a few cheesy one-liners and the saves the world. This film is absurd.
» More about San Andreas
» More reviews of San Andreas
» More reviews by The Sci-Fi Slob