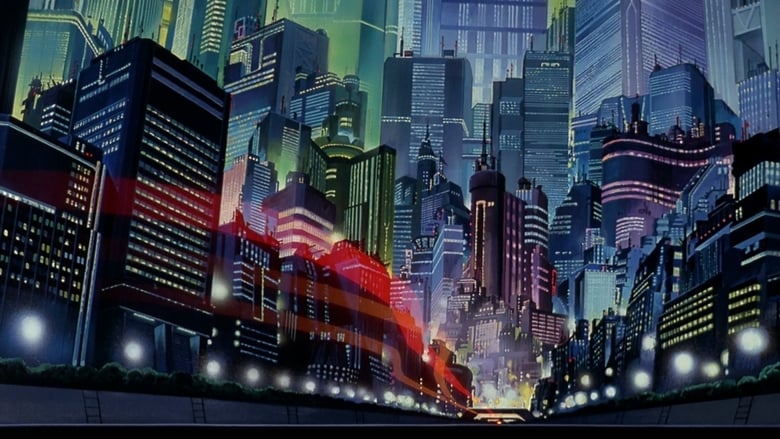 Animé has gotten a lot more advanced and fluid in the decades since Akira's release (and the fact that this particular viewing was of a 35mm print complete with noticeable scratches meant that there were probably no Special Edition touchups), but that doesn't stop it from still being a visual extravaganza. Sure, its depiction of the futuristic Neo Tokyo may take considerable inspiration from Blade Runner with its urban landscape bathed in gloomy darkness and neon lights (that's also set in the year 2019, no less), but Ôtomo takes advantage of the medium's freedom to expand upon his source of inspiration and recreate it on a scale that befits the action-packed narrative.

The narrative, which is complex enough to take more than one viewing to fully absorb, is a fundamentally simple one about a pair of teenage bikers named Kaneda and Tetsuo. Kaneda is the arrogant and snarky leader of the gang whereas Tetsuo is a withdrawn, embittered member with a lifetime of emotional damage and resentment. This ties into the plot when he almost runs over a withered-looking young boy. It turns out that the boy is a test subject for a government experiment on telekinesis, and his encounter with Tetsuo triggers the latter's own latent psychic abilities. There are plenty of other plots and characters thrown in for good measure such as Kaneda falling in with a group of saboteurs because he's attracted to their sole female member or a no-nonsense Army colonel who must contend with dangerously curious scientists and incompetent politicians, which all play their part in pushing the story along and serving as different facets of the film's fantastic take on post-war Japan and the devastating events that still affect the country's cultural identity. As a result, the world they inhabit feels very well-realised over the course of two visually captivating hours. It's not like there's anything especially black-and-white above most of the film's morality save for the occasional greedy executive or excessively violent gang member. Kaneda makes for an especially flawed hero thanks to his generally self-interested behaviour influencing any possible heroism he may possess, whereas Tetsuo's newfound powers are put to work against the world that has kept him down for his entire life regardless of how justified his actions are.

While the plot and characters do contain considerable thematic resonance to the point where I seem to pick up on something new each time I watch (and I've watched Akira a lot), the film's greatest strengths is as an extremely immersive cinematic experience. The film creates an amazingly detailed and arresting futuristic setting that covers grimy industrial areas and labyrinthine government facilities, all of which back up some great sequences. The opening feud between Kaneda's gang and a rival gang (resulting in the iconic shot from the header image) is filled with streaking tail-lights and fiery explosions, while the film's eventual escalation into psychokinetic acts of destruction is definitely astounding. That's without going into the stuff that doesn't pull from the regular sci-fi/disaster playbooks, such as Tetsuo's hellish hallucinations of giant toys that bleed milk or watching the world (and himself) crumble to pieces. When the line between nightmare and reality gives way as a result of the infamously grotesque and mind-bending finale, you know you've watched something outstanding. Credit also has to go to the Geinoh Yamashirogumi score, which has only the slightest nods to stereotypically synthesiser-filled sci-fi scores as it builds most of its score around chants, choirs, percussion, and pipes. Though they all amount to variations on the same theme, the execution for each particular track distinguishes them all with aplomb.

I try not to throw around the phrase "all-time favourite" lightly because I'd rather not run the risk of re-watching such a film and feeling disappointed, but Akira has more than earned it in the decade or so since I first watched it. As of writing, I've seen it in theatres four times (which is tied for my current personal best - for now) and countless more times on DVD. Its narrative density and unsettling subject matter that invokes many horrors of the body and mind are factors that may alienate some viewers, but if you're willing to brave such a proposition then you'll definitely come away with something worthwhile. I've been going back to it again and again and have written at length about some of its most interesting factors (as I mentioned, its allegory for the attitudes of post-WWII Japan is a rather elaborate and multi-faceted one even while it serves as window dressing for graphic catastrophe) and it's a film that I still find consistently rewarding.

Addendum: I feel like I should address the different types of dialogue tracks that can accompany this film. Most of my viewings have involved the 2001 Pioneer English dub, which sticks to the original Japanese script pretty closely (though the idiom doesn't translate into English perfectly, but thats a minor flaw considering the talent on display). The 1989 Streamline English dub plays fast and loose with the dialogue and is objectively the weaker of the two English dubs but the rough quality and comical turns of phrase (plus the legendary Cam Clarke playing Kaneda as a snot-nosed surfer type) at least guarantee some amusement, which is good since it's the version that tends to accompany film prints and thus provides lots of laughs in a theatrical context. Of course, you can always avoid both and stick to the original Japanese with subtitles.
» More about Akira
» More reviews of Akira
» More reviews by Iroquois