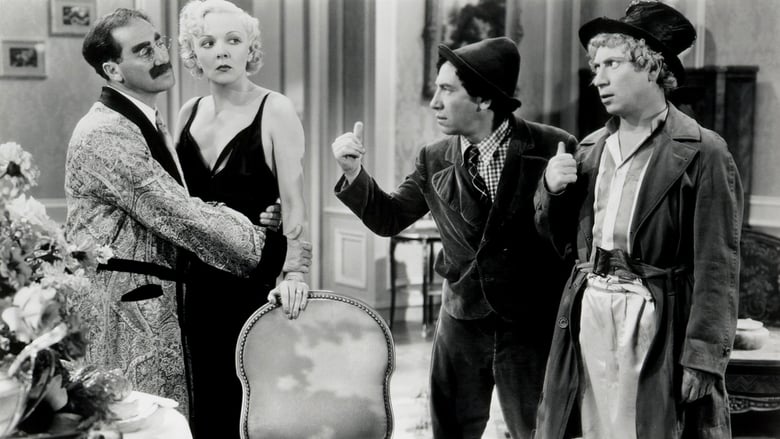 A Day at the Races

A young woman is forced to enrol the help of a trio of oddballs in order to make the money necessary to save her sanitarium using a racehorse.

Duck Soup was the first Marx Brothers film I ever saw, and I really liked it because it condensed all the brothers' strengths - Groucho's witty wordplay, Harpo's mute tomfoolery, and Chico being a capable foil for both of them - into a quick and easy film about a fake European country going to war. Unfortunately, every film of theirs I'd seen since then has felt like an example of diminishing returns. The schtick that had worked wonders the first time around started to seem oddly underwhelming to the point that I've given up expecting any of their films to live up to the high standards set by Duck Soup. A Day at the Races is no exception in this regard as it indulges a lot of the lesser facets of a Marx Brothers film. The plot is familiar enough; it involves a young woman trying to save her sanitarium by any means necessary, including hiring a doctor (Groucho) at the insistence of her wealthiest patient - this is despite the fact that Groucho is actually a vet, which he hides in order to maintain his employment. The plan to save the sanitarium involves a desperate ploy involving her boyfriend's newly-acquired racehorse and the local racetrack, which naturally involves a snobs-against-slobs struggle as Groucho, aided by a scam artist (Chico) and a jockey (Harpo), must work against a variety of stuffy authoritarian types in order to save the day.

One of the main problems that distinguishes A Day at the Races is that it's far too long. It clocks in at almost two hours in length (over half an hour longer than Duck Soup), most of which is because of extremely extraneous musical numbers. Granted, every Marx Brothers films has had them but they've never felt as much like dead weight as they have in this movie (one extremely lengthy musical sequence takes place in an African-American section of town and involves the brothers using blackface in an attempt to hide from their enemies, which is awfully distracting on several levels). Length notwithstanding, it's not hard to feel like there aren't any interesting variations on the brothers' own particular gimmicks, which are somewhat clever but don't inspire any laughter. Every time I watch a new Marx Brothers movie and find it wanting, I worry that I'll revisit Duck Soup and have a similarly underwhelmed reaction. It's a shame because I can definitely respect their contribution to modern comedy but I'm disappointed that their actual work doesn't do a whole lot for me nowadays.