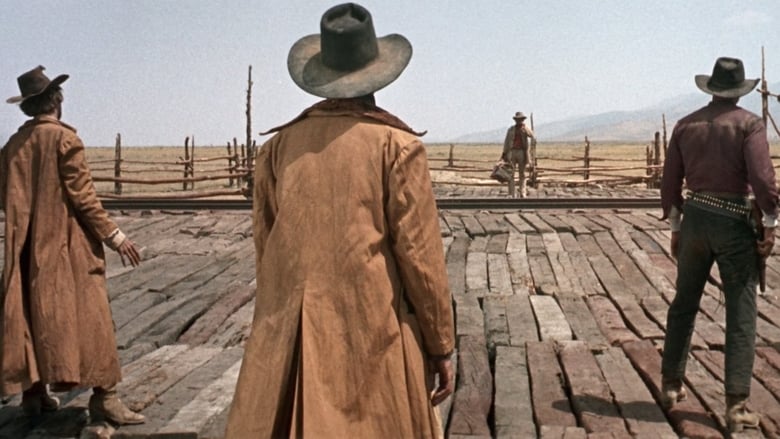 A widow is drawn into a conflict over her recently deceased husband's extremely valuable tract of land.

It says a lot about how much of a sprawling Old West epic this film is that such a basic logline manages to accurately sum up what the film is about and also do virtually no service whatsoever to what makes the film great. Though it'd be easy to go in expecting Charles Bronson's harmonica-playing gunslinger to be the so-called hero of this little venture, he really is just a supporting player in a greater narrative about the aforementioned widow (Claudia Cardinale) expecting to come home to her family's new ranch only to find they've been murdered by a ruthless mercenary (Henry Fonda) working on the orders of a railroad tycoon (Gabriele Ferzetti). The attack is carried out in such a way as to frame a gang of bandits led by Jason Robards' gruff yet honourable outlaw. With all the necessary players introduced, the battle for the land and the realisation of its true purpose is ready to play out on a stark landscape peppered with dust and death.

Once Upon a Time in the West plays out like an opera without singing - if anything, the characters and their actions make for the ideal substitute for actual singing. It would at least go some way towards excusing the clunkiness of some of the English dub's dialogue (and how it will noticeably lose sync from time to time), but for the most part it translates the lyrical yet world-weary nature of the characters' exchanges just fine. The score is rightfully considered one of Leone's best with each of the main characters getting their own theme music - while the theme for Cardinale's character makes for a perfectly moving and sentimental piece on its own, people will most likely remember the twanging guitar and abrasive harmonica that define Bronson and Fonda's leitmotifs. The film is naturally a visual stunner with its astonshing wide shots and claustrophobic close-ups that capture unforgettable imagery (most notably the opening sequence, but also several deaths that resonate for one reason or another). Characters are well-developed - Bronson is good as an avenging angel, while Fonda gleefully plays against do-gooder type as a savage yet charismatic killer. Robards is the closest things get to a weak link as the outlaw with a heart of gold who begins an unlikely friendship with Cardinale, whose complicated past and trauma-ridden present make for a character who is very aware of her uncertain future.

Though I still consider Once Upon a Time in the West a major favourite not just as far as Westerns go but as far as films in general go, I won't deny that the operatic nature of the film can work against it a bit somewhat. The film may not deal in the same brand of awesome bloodshed that the Dollars trilogy did (which may be part of the reason why I still give The Good, the Bad and the Ugly the edge when it comes to ranking the Leone films) but it still makes for some of the finest cinematic grandiosity to ever exist. From its slow-burn opening that makes a bunch of guys waiting for a train into captivating cinema through to its extremely bittersweet conclusion, this is still a film that I will probably consider a masterpiece for a very long time, if not forever.