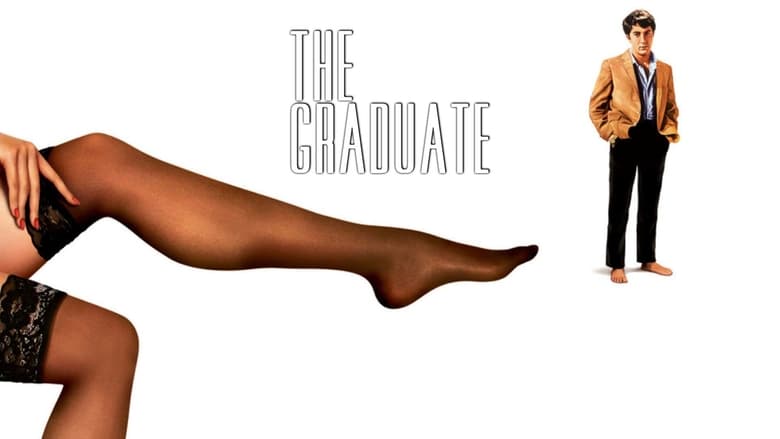 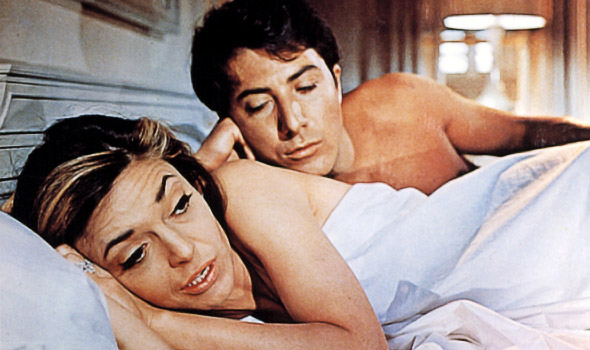 The quote that starts everything.

I just want to say before I start anything else: Wow, what an experience.

The Graduate is equivalent to a 60s version of Pulp Fiction. Not because the plot are characters are similar, but because of the never-aging cultural impact. The late 60s started a sex craze and liberal, open ideas of society that would last for many years, and The Graduatewas an important part of it.

But is the film simply a rebellious piece of art that is responsible for breaking the ideal clean, pure, and conservative American society? I think it's rather the exact opposite. Most seem to believe that The Graduate is mainly about Anne Bancroft seducing Dustin Hoffman. The film is indeed dirty, wild and free-spirited. Now, if it just could be summed up with that single sentence, it wouldn't be a masterpiece. The Graduate is a masterpiece because it doesn't end as a comedy about an awkward situation involving a married woman – unlike most comedies it shows the painful aftermath, and the ugly side the audience usually doesn't want to see. It isn't praise sex and affairs, instead it shows what it could lead to. The Graduate is daring not because of it's, at the time, outrageous and controversial premise. It is daring because of the film's impeccable ability to dissect a complex series of events, and then put them back into a both tragic and relate-able quest for trying to find an answer in the midst of barriers of freedom located everywhere.

The film starts off with Benjamin Braddock (Dustin Hoffman) traveling back to his home to attend a graduation party his parents and relatives have prepared. The camera's focus is always on him, but he is mercilessly constantly overshadowed and bothered by other people who want to control his future. Famously, one of them says the future is in "plastic". He tries to answer their questions, but you obviously see that Ben is annoyed by all the fiasco. In an attempt to have a moment to himself, he goes to his room.

After meeting Mrs. Robinson (Anne Bancroft), who asks if Ben can give her a ride home, the two starts a secretive sexual relationship after Mrs. Robinson tries her best to convince Ben. When Ben realizes that she's only with him for the sexual pleasure, he leaves her, and Mrs. Robinson slowly becomes angered. As revenge, she doesn't t allow Ben to date with her daughter, Elaine (Katharine Ross), even though clearly the two like each other, which is the point.

I'd like the comment on the music used in the film. Simon and Garfunkel, the folk/rock band became nationally famous after their songs where used. The songs are pleasant to listen to but on the inside deep and depressing, perfectly matching Ben's psychological state. The songs are an essential part of the movie but never interfere too much. It's s the same for other minor sub-plots and arcs. Mike Nichols knows what he's doing. He knows that the film isn't just any other comedy; he knows that Dustin Hoffman's character and the inner conflicts should be the focus.

That being said, Dustin Hoffman's performance shines, even when beaten down and rejected by unwelcome tyrants who loom over him. In fact, the supporting characters give an ever more powerful emphasis. It creates a sense of connection, relating to thousands of new graduates, and those soon to be one, or even anyone struggling with a love that cannot happen, including me.

I am currently in my final year in college, and to be honest I don't know what to do when I need to struggle to find my own place in this hectic, depressing world. To this day I keep hesitating and lose the little confidence I have. Similarly to Ben, I studied for hours and hours trying to get into a college at least located in the capital city, where everything trendy and innovative happens. I succeeded, people were proud of me, and now what?

Benjamin at first is a slightly stammering and a very passive person, but once he meets something he wants to fight for, Elaine, he gains courage. He jumps, runs, and drives all around town and fights a mob of people. In my opinion, the film indirectly tells young men and women that they should have a flame in their heart. Maybe I'm over-thinking this, but it's the impression I got as the movie faded away and ended.

I wanted to write about the outstanding and dynamic editing and the cinematography by Robert Surtess, also the cinematographer for the 1959 version of Ben Hur. However after I was done writing all of the above I wanted to end on a more personal note, because it has been a long time since a film left such a profound effect on me. My expectation for this film was definitely not what I'm going through now, put into a cinematic fantasy, then wonderfully executed by the hands of a director I enjoy, a genius rock duo I love, and a cast that I was not familiar before, but as a result of this film want to dig into. I am glad to have watched The Graduate for the first time at a right age and before the Movie Forums 60s list.

From this moment on, I induct The Graduate into the hall of Gatsby's personal favorites.