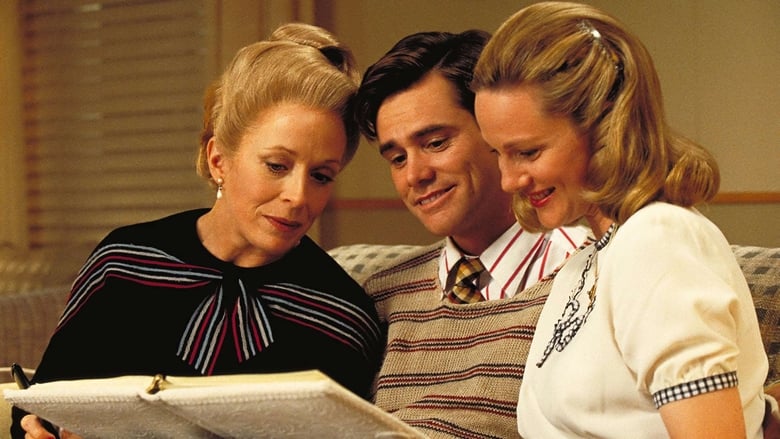 An insurance salesman/adjuster discovers his entire life is actually a T.V. show.

Truman Burbank (Jim Carrey) lives a good life. He has a nice job, a great wife, and many friends. The only problem is that Truman doesn't know that his whole life has been a fake one. From the moment Truman was born, he was placed into a giant isolated movie set. Everyone who lives in the town is an actor, including his wife and friends. The rest of the world watches every second of his life in the form of The Truman Show; a reality program that follows Truman around every step of the way.

When Truman starts slowly piecing together that his life is not what he thinks it is, how will he react? It is an interesting and sometimes emotional quest that has us rooting for Truman every step of the way. When Truman starts to realize what is really going on, it is up to Christof (Ed Harris), the show runner, to pull out all the stops. Jim Carrey, like in much of his early roles, was fantastic. His charisma and humour carried the movie, but we also got to see a much more emotional and sympathetic side of him. His supporting cast was just alright. A personal favourite was Ed Harris up in the control room. His voice is able to command every scene and creates a strong authority figure over Truman even though we never see them actually meet in the flesh.

I thoroughly enjoyed The Truman Show. The concept is sort of relatable to current reality shows such as Big Brother. Weir & Niccol both definitely earned their Oscar nod. The viewer is fed everything they need to know right from the start. There is no need for exposition or time away from the plot to keep the audience informed and focused. This allows the audience to be steadily reeled in through a compelling journey carried by our main star, Truman Burbank.
ģ More about The Truman Show
ģ More reviews of The Truman Show
ģ More reviews by Fabulous