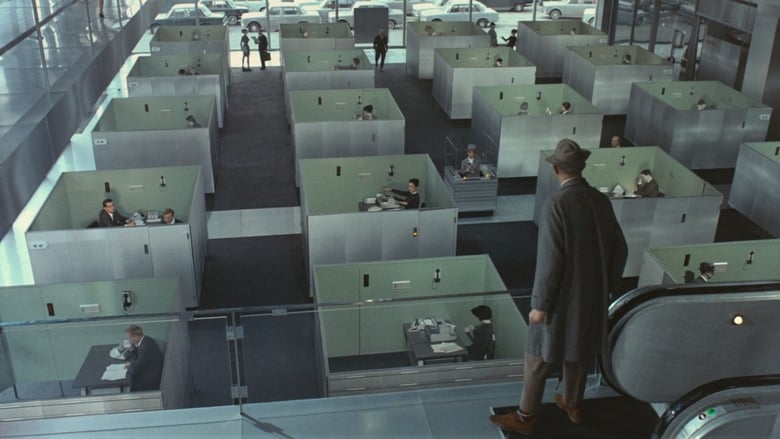 by Daniel M
posted on 2/07/15
in
I've watched a few great films recently, and I'll post about them soon, but I feel like I really, really need to post about this one. 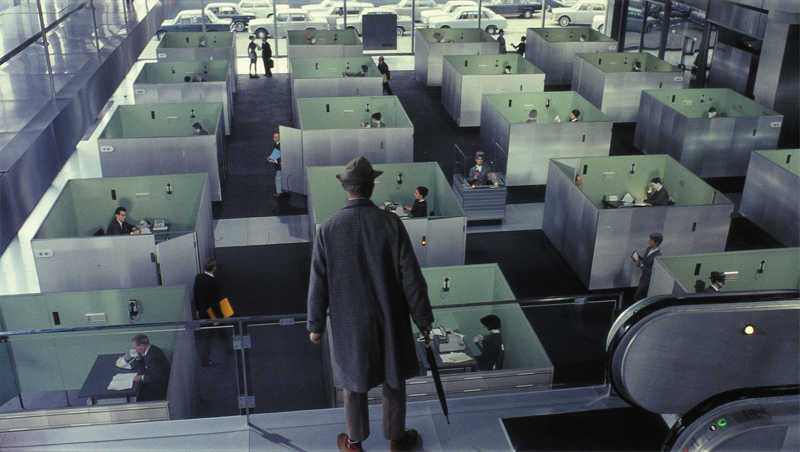 This film is a miracle. I was trying to work out in my head how to start my post, and I came to the conclusion that anything less would be an understatement. How on earth did Tati manage to construct such magnificent sets, to get buildings perfectly designed for his world? Everything is meticulously planned to perfection, the amount of cars, costumes, people themselves. It's absolutely mental how precise everything is and how well it comes together, perfectly choreographed.

The title is fitting for a film of organised chaos. It feels like Tati is sitting with a soundboard or similar device, pressing little buttons that set off lights and such in different objects - just like at the start of the film where he receptionist (?) makes a call to an office via pressing a combination of buttons that make different sounds and illuminate different lights.

The flawless design results in hundreds of extremely clever visual gags as well as physical ones from the characters involved. I feel bad watching the film at home on my TV. I know Tati insisted on the film only being shown in cinemas that supported 70mm and the sound system he wanted, and it is easy to see why. There are so many details and jokes packed into every frame, it is impossible to see everything that is going on. I felt delighted when I spotted different things such as reoccurring characters and jokes. I want to watch this film again already, and I can feel this becoming one of my all time favourite films that I will watch over and over again, spotting delightful new things every time. There are so many unique and hilarious characters throughout, and if I was to list individual moments, scenes, gags, I could be here forever. Tati directs and acts like a silent film star, he seems like the next step on from Buster Keaton. Here, the dialogue is secondary to the action and blend of all the other elements. The camera is carefully placed to often tricked us, sometimes walls or gaps between them are not visible to us, so actions are not always what they seem.

That's not to mention the films messages and what it aims to critique and laugh at. It is obvious to anyone that Tati is satirising the evolution of technology and modern day life and gadgets. His character gets lots in a confusing maze that scarily resembles what modern offices now look like, if his character moves to one place, his destination will move to another, he's unable to keep up with what's going on. I liked the commentary on Paris, on France. In one noticeable visual trick, the Eiffel tower can be seen as a mere reflection on a glass of a modern business building. The Paris that tourists are coming to see is not that of dreams, but instead a bleak, grey, modernistic world filled with machines. The film seems to undergo some sort of evolution in this sense, what starts of as characters lost in a world, the second half seems to bring them together, things go wrong but friendship goes stronger. Then in the famous final roundabout scene we see significant colours of red, white and blue, just like the opening credits (that are focussed on the sky, before dropping down to the grey city), as the music plays.