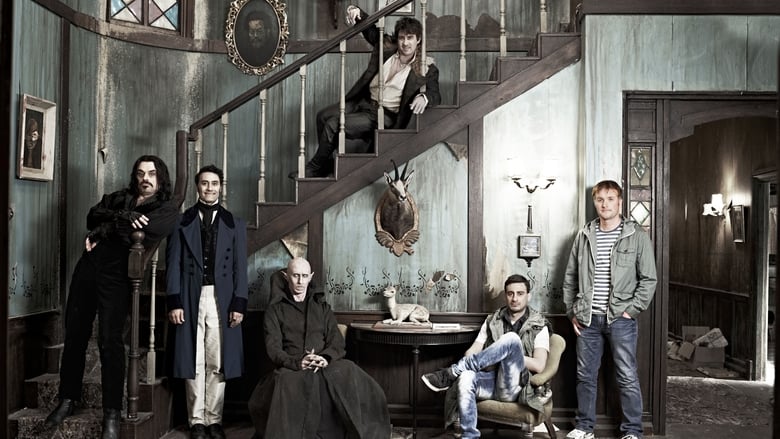 What We Do in the Shadows

A mockumentary centring on four vampires who share a house in Wellington, New Zealand and their day-to-day (or is that night-to-night?) lives, which are complicated when one of their intended victims is turned into a vampire instead.

What's a better type of comedy - the one that's cleverly written but doesn't make you laugh out loud, or the one that's not too smart but still gets you chuckling? What We Do in the Shadows definitely falls into the former category - despite a simple yet ingenious premise and a sharp take on vampire lore, most of it is merely amusing. It runs through almost every trope associated with vampire fiction over the course of a quick eighty minutes, which is about how long the gag can last. Fortunately, it helps that the main trio of vampires (the fourth one, an 8,000-year-old Orlock-like creature called Peter, only pops up at crucial plot points) have enough odd-couple chemistry to keep the humour flowing. As befitting the mockumentary angle, the vampires go about talking about parts of their everyday lives - the struggle of not being able to look in mirrors, being unable to get into clubs because they need to be invited, and (in one memorably black sequence), the prim and proper Viago going the extra mile to make sure his victim has a nice last date before he feeds on her. The lead characters all get sufficient development and their own subplots - selfish "young" vampire Deacon has a thrall who is constantly doing favours for him in order to become a vampire herself, while Vladislav is an older vampire clearly based on Bram Stoker's Dracula who constantly grumbles about his old arch-nemesis "the Beast" in such a way that you know a confrontation is inevitable. Having the film establish a climax to work towards - in this case, the yearly gathering of supernatural creatures known as the "Unholy Masquerade" - is a good move to counter the relative aimlessness of the film's premise.

I generally liked this film, but it's clear around the hour mark or so that it's running out of steam and the climax not only feels a bit forced, but it involves shakycam to the point that it's hard to tell what's going on. It's a good concept and there's some serious talent on both sides of the camera - shakycam climax aside, the effects work on offer here is rather impressive and every actor is at the very least serviceable. The gags are clever enough, even though I didn't exactly laugh at them - not even the scene of Viago laying down towels in order to avoid getting a victim's blood on his antique couch only to end up accidentally hitting his victim's artery and getting blood everywhere. It's not a bad way to spend an hour and a bit but yeah, this is one of those films where calling it "clever" feels like a backhanded compliment more than anything else.