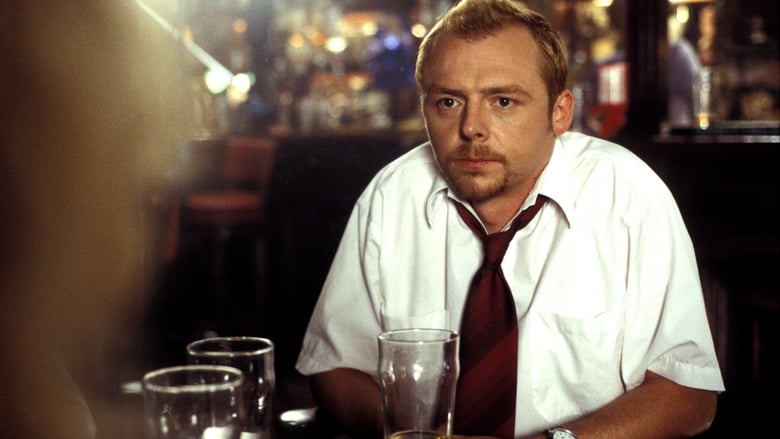 Shaun of the Dead

When Shaun crosses the line and forgets about a romantic Anniversary dinner with Liz, she dumps him, only for the world to come under attack from Zombies...

... and Shaun does everything he can to make sure that his Mum and Stepdad, his best mate Ed and his ex-Girlfriend are safe from attack...

... by taking them to the Winchester Pub.

Many call the film a parody of many other movies but Shaun really is a highly inventive and incredibly clever throwback to the horror genre, with a ton of new stuff thrown in and lashings of typical Pegg And Frost humour.
If you want a Pegg/Frost Parody movie, watch Paul.

For a start, everything in the film is recognisable.
The character traits of the main two heroes being slacking no good boyfriends who immediately think "Winchester Pub" when the Zombies attack is just a part of the real life humour that's laden throughout the film.

The other thing is the dialogue writing, especially with two sides of the story.
One being the arguements between Shaun, Ed and whoever they're fighting with...
The other being the pally side of things between Shaun and Ed too.
It's very, very authentic and gives the one-liners and humour much more of an edge than any other buddy movie going.
Even the more colourful language is laugh out loud funny.


The acting is also spot on.
Simon Pegg as Shaun and Nick Frost as Ed are absolutely two of a kind. Their chemistry on screen is so real (obviously with them being real life besties). It's been a long time since there's been such a special screen duo. They're fantastic.
Kate Ashfield as Liz is also an inspired piece of casting. Her chemistry with Pegg is another top piece of work and Ashfield is seriously likeable. She's definitely the right pick for a girlfriend for Shaun.


The other thing that really pieces the film together perfectly is the almost slapstick and surreal nature of some of the stunts and highly charged cinema.
It adds even more depth to the action and even more humour to the blood and gore on screen too.

Smashing a Pub Landlord with pool cues to a Queen soundtrack has to be seen to be believed.

The gore and blood effects are also top notch, especially some of the Zombified locals.


All in all, Shaun sums up what it takes to make an almost perfect comedy horror.
It's highly gory when needed, full of great acting chemistry, real and surreal, has great dialogue and even manages to pull a few heartstrings with the character arcs that run through the running time too.
Brilliant.