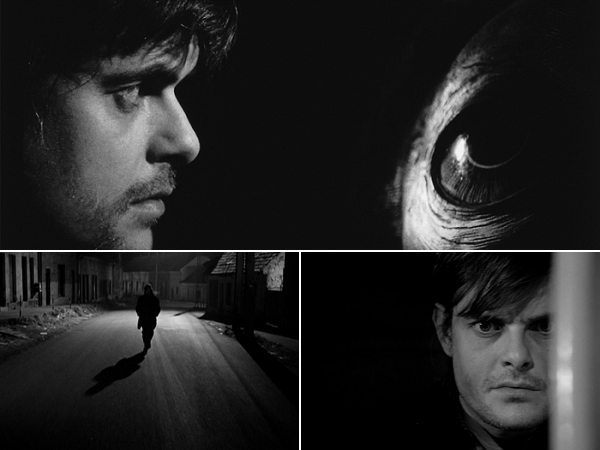 "How mysterious is the Lord of the world, that he amuses Himself with such strange creatures."

In this art piece which could be interpreted in many different ways, the director asks us important questions, but we have to give the answers to these questions ourselves. Or, perhaps trying to supply the answers is beside the point. In response to an analysis of a lengthy sequence which takes place inside a hospital (in which a group of violent men have a sudden change in behavior when they find themselves facing an old man with nothing but a wall behind him), the director has said that they do so because, well, there is only a wall ahead of them. It's that simple. It's because they're left with no choice. And you could easily sum up the entire film with that one sentence; maybe the film is not meant to be overanalyzed or explained, but simply seen and felt.

And this is one of those movies that I definitely felt. Not enjoyed or loved, but felt, like its ever-present beautiful melancholic melody. I probably would not have heard of this film (at least not this soon) had it not been for this community, and while it definitely didn't introduce me to art house film, it is one of the first films of its kind which I found not artsy just for the sake of being artsy - it is how it is for a reason, and because it serves a purpose.

I'd even go so far as to say that it is, thus far, perhaps the first art film which I found not trying to draw attention to itself, its creator, or its cinematic techniques. The film is two and half hours long and consists of only thirty-nine masterful long takes, which to some may sound tedious or even pretentious at first (yes, I used that word), but I found it to be quite the opposite of that, which is probably why I was able to appreciate the film as much as I did.

Werckmeister Harmonies is enigmatic, mysterious, and one hell of an experience. The film looks minimal and feels natural despite the ambiguity surrounding it, and its black and white photography combined with the film's mood and use of location help to give the work a sense of timelessness: it doesn't matter where, why, or when the film is taking place, it is a work which is universal in its themes, and which could be seen as a metaphor for life itself.

Despite the fact that I said it is an enigma which should not necessarily be solved, you can't help but wonder just what it is trying to say. Is it an allegorical work with political undertones, or simply about a daydreamer who is forced to face the harsh realities of the world? Or is it about something else entirely? You decide.