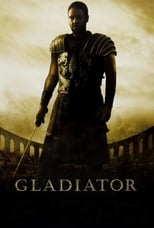 Release: May 1st, 2000
Runtime: 2 hours, 35 minutes
In the year 180, the death of emperor Marcus Aurelius throws the Roman Empire into chaos. Maximus is one of the Roman army's most capable and trusted generals and a key advisor to the emperor. As Marcus' devious son Commodus ascends to the throne, Maximus is set to be executed. He escapes, but is captured by slave traders. Renamed Spaniard and forced to become a gladiator, Maximus must battle to the death with other men for the amusement of...

99 Gladiator
Hey I just noticed that nobody in this place has started a thread about Gladiator. I just want to know what anybody thought about, so that I could get into a meaningful conversation or debat over it...

BraedenG33 A truly epic film, Gladiator is a testament to the type of incredible and still emotionally meaningful spectacle film can create that is unique to the medium.
READ REVIEW

The Rodent What Gladiator revels in though, is sheer scope of the story, breathtaking scenery and incredibly exciting battles.
READ REVIEW

Iroquois It's too inconsistent a film to truly be considered a classic, Best Picture win be damned (did the Academy want another Braveheart or what?).
READ REVIEW
View All (4)