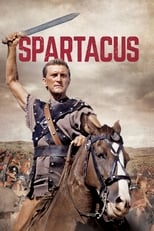 Release: Oct. 6th, 1960
Runtime: 3 hours, 17 minutes
The rebellious Thracian Spartacus, born and raised a slave, is sold to Gladiator trainer Batiatus. After weeks of being trained to kill for the arena, Spartacus turns on his owners and leads the other slaves in rebellion. As the rebels move from town to town, their numbers swell as escaped slaves join their ranks. Under the leadership of Spartacus, they make their way to southern Italy, where they will cross the sea and return to their homes.

0 Spartacus
SPARTACUS (1960) How do you begin to choose a masterpiece from a back catalogue as prominent as Stanley Kubricks? With such creative works as the provocative ‘A Clockwork Orange’, the...

NO RATING
mark f Since Spartacus is seen by some viewers as less than a pure Kubrick film, a group of film buffs deign it to be less significant, entertaining and absorbing than his other films, but I've never understood that.
READ REVIEW

Iroquois I'm still working through Kubrick's filmography - still have to watch most of his pre-Lolita work at this point - and I figured that Spartacus would be interesting because of its notorious reputation for being a mainstream Hollywood epic filmed by an idiosyncratic auteur like Kubrick.
READ REVIEW