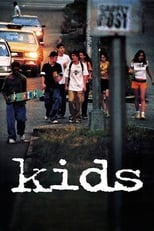 Release: Jul. 28th, 1995
Runtime: 1 hour, 31 minutes
A controversial portrayal of teens in New York City which exposes a deeply disturbing world of sex and substance abuse. The film focuses on a sexually reckless, freckle-faced boy named Telly, whose goal is to have sex with as many different girls as he can. When Jenny, a girl who has had sex only once, tests positive for HIV, she knows she contracted the disease from Telly. When Jenny discovers that Telly's idea of "safe sex" is to only have sex...

10 Kids
Larry Clark is known for making some of the most controversial films over the last thirty years and it all started in 1995 with the film Kids. Set around a twenty four hour period in New York Kids fo...