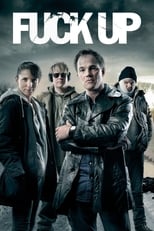 Release: Mar. 16th, 2012
Runtime: 1 hour, 40 minutes
Jack is pleased with himself for the first time in years. He has decided to stop fucking anything with a pulse and also to cut back on his eager and enthusiastic drug use. Then his best friend crashes into a moose in the middle of the night on the Swedish border. He is found with a hoof buried in his forehead and 2.5 kilos of cocaine in the trunk. Over the next 24 hours, Jack loses his house, his girlfriend leaves him and takes their daughter...