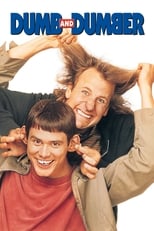 Release: Dec. 16th, 1994
Runtime: 1 hour, 47 minutes
Lloyd and Harry are two men whose stupidity is really indescribable. When Mary, a beautiful woman, loses an important suitcase with money before she leaves for Aspen, the two friends (who have found the suitcase) decide to return it to her. After some "adventures" they finally get to Aspen where, using the lost money they live it up and fight for Mary's heart.

2 Dumb and Dumber: what do you think about it?
personally i think this is one of the worst movies ever made but my best friend thinks that it's pretty funny and a good movie all i ask is your honest opinions so that this may be laid to rest nuf...
2 Dumb and Dumber 3 (NOT TRUE)
Ok, I am tired of reading in other forums that their will be a Dumb and Dumber 3. This is stupid. 1 was great, 2 was ok, but 3. I am not sure if this has been discussed here, because I am still new, b...
1 song from dumb and dumber
in dumb and dumber, when lloyd is driving in the car before he picks up mary... what is the song that is playing?...
39 Dumb and Dumber sequel
It's actually happening! I can't see it being better than the first, nor do I think it will have the same cult classic feel (and in all likelihood once it's released some will even say "i...
45 What is the dumber alien from movies?
I was in doubt if I ever would go and make a thread like this because I thought that no one would care. But then I saw a thread called something like "Home alone 1 or Home alone 2" and all m...

The Rodent It also has it's fair share of buddy moments, Carrey and Daniels have brilliant chemistry throughout the entire movie, they bounce off one another perfectly and when the occasional hit of tragedy strikes, you really feel for them.
READ REVIEW