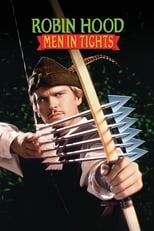 Release: Jul. 28th, 1993
Runtime: 1 hour, 44 minutes
Robin Hood comes home after fighting in the Crusades to learn that the noble King Richard is in exile and that the despotic King John now rules England, with the help of the Sheriff of Rottingham. Robin Hood assembles a band of fellow patriots to do battle with King John and the Sheriff.

10 Robin Hood: Men In Tights
I'm just making a thread because I noticed there isn't a thread about this movie. I enjoy this movie very much as well as any other Mel Brooks film. I love comedies, especially when it's self aware hu...
121 Robin Hood
Crowe as Robin Hood Thoughts?...
12 Robin Hood
Russell Crowe teams up with director Ridley Scott for the fifth time with Robin Hood. It’s difficult to forget the massive entertainment these two forces brought audiences with 2000’s Gladiator, and w...
11 Robin Hood
"Two new images for the upcoming Robin Hood reimagining have arrived, teasing the film’s new take on the classic story. Originally titled Robin Hood: Origins, this fall will see Otto Bathurst...
6 Robin Hood: Prince of Thieves
I just finished watching my Robin Hood: Prince of Thieves DVD and I have gotta say that I really like this movie. I know Costner has an American accent throughout but if you can get past that, the mov...

KeyserCorleone Robin Hood: Men in Tights, as the name suggests, is a humorous take on Robin Hood's incarnations with Kevin Costner and Errol Flynn as he returns from England to find his home destroyed, with the only survivor being a blind servant.
READ REVIEW