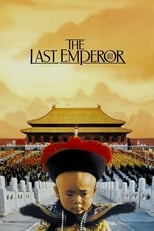 Release: Oct. 21st, 1987
Runtime: 2 hours, 43 minutes
A dramatic history of Pu Yi, the last of the Emperors of China, from his lofty birth and brief reign in the Forbidden City, the object of worship by half a billion people; through his abdication, his decline and dissolute lifestyle; his exploitation by the invading Japanese, and finally to his obscure existence as just another peasant worker in the People's Republic.

We didn't find any linked discussions for this film. Here are the results of a quick search of possibly related threads:
6 Emperor's New Groove
So, I took the kids to see the new Disney Animated movie "The Emperor's New Groove" this weekend. I have to say that I was very disappointed in the film. Disney has set the bar very high...
6 Soundtrack of the emperor's new groove
Is someone know the song's name (title) that we hear in the film preview; The emperor's new groove ? It's a very good song about 10 to 15 years old... I'm looking for this song but I don't know The ...
16 The Mummy 3 Tomb of the Dragon Emperor
I'm destined it seems to watch and enjoy and then defend these kinds of movies until my dying breath. To bad for you I suppose because I rather enjoy arguing. I'll save you the trouble of reading ...
1 Kingdom of the Crystal Skull vs. Tomb of the Dragon Emperor
I didn't have room to type in the full titles of the movies, but which of these similar action adventure supernatural sequels, both from 2008, would you say is better? It's been years since I've se...