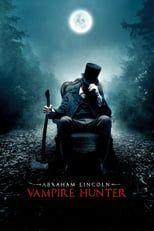 Release: Jun. 20th, 2012
Runtime: 1 hour, 34 minutes
President Lincoln's mother is killed by a supernatural creature, which fuels his passion to crush vampires and their slave-owning helpers.

35 Tim Burton's Abraham Lincoln, Vampire Hunter
Gee, I wonder who is going to play Mary Todd Lincoln? Could her initials be HBC? Johnny Depp...Abraham Lincoln (with lifts) or John Wilkes Booth? ...
13 Abraham Lincoln: Vampire Hunter - worth watching?
Hi, I've seen the trailers for this one a few times and thought they looked pretty cool. Just wondering if it is worth a look or not? I've heard mixed things so far. Thanks....
18 Abraham Lincoln Vampire Slayer
About 2 hours I saw this and it starts on the 2nd of August. Everything is about vampires...lol! ...
23 Daniel Day-Lewis will be playing the role of President Abraham Lincoln
Daniel Day-Lewis will be playing the role of President Abraham Lincoln in Spielberg's next project. by Adam B. Vary Categories: Biopics, Casting, Daniel Day-Lewis, Film, Lincoln, ...
17 Beale Reviews Vampire Hunter D: Bloodlust
Anyone that knows me knows that I'm not the world’s biggest anime fan. It's not that I have anything against it...it's just when going to rent movies, I very rarely rent them. It just isn't what c...