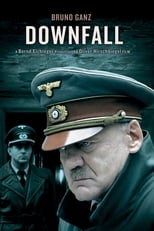 Release: Sep. 8th, 2004
Runtime: 2 hours, 36 minutes
In April of 1945, Germany stands at the brink of defeat with the Russian Army closing in from the east and the Allied Expeditionary Force attacking from the west. In Berlin, capital of the Third Reich, Adolf Hitler proclaims that Germany will still achieve victory and orders his generals and advisers to fight to the last man. When the end finally does come, and Hitler lies dead by his own hand, what is left of his military must find a way to end...

11 Money is downfall of hollywood?
ok, after looking through lots and lots of info on imdb.com i have come to a conclusion. the more moey spent on films the worse they are. this is not true for every film but most. i mean if a film is ...
25 The downfall of great directors
Which of the many downfalls of once very acclaimed directors is the most shocking one, in your opinion? I was always shocked by what happened to Francis Ford Coppola. He pretty much became the most...
7 Beverly Hills Chihuahua or: How I Learned to Start Worrying about the Downfall of Society
Wow. Just...wow. I get what they're going for here. Really, I do. And in another place, in another time, and with another premise entirely, it might have worked. At least during the Happy Feet t...

Citizen Rules As Nazi Germany falls, Hitler and his staff are hold up in the Fuhrer Bunker in Berlin, waiting for the advancing Soviet army and the fate that befalls them.
READ REVIEW

Thursday Next Downfall is an important film in that it is a German film about German history and in that it shows us Nazis as human beings.
READ REVIEW

adidasss Goebbels kills her own children is extremely chilling ) or the fact that evil has been given a human face ( for example, the shot of Goebbels waiting outside the room while his wife kills his children because he simply couldn't bring him self to watch it, or Eva Braun, Hitler's wife, who was display....
READ REVIEW