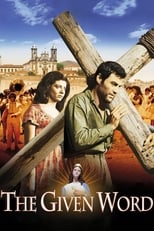 Release: Apr. 17th, 1962
Runtime: 1 hour, 38 minutes
Zé is a very poor man whose most prized possession is his donkey. When his donkey falls terminally ill, Zé makes a promise to Saint Bárbara: If his donkey recovers, he will carry a cross - like Jesus - all the way from his city to Saint Bárbara's church, in the state capital. Upon the recover of his donkey, Zé leaves on his journey. He makes it to the church, but the priest refuses to accept the cross once he discovers the context of Zé's promise.

42 I'll give you a word, and you'll tell me what song fits that word
For instance. I am going to say the word "Desperate" And my song pick is "People are Strange" by the Doors....