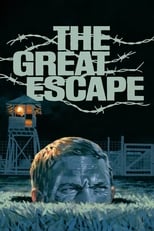 Release: Jun. 20th, 1963
Runtime: 2 hours, 52 minutes
The Nazis, exasperated at the number of escapes from their prison camps by a relatively small number of Allied prisoners, relocate them to a high-security 'escape-proof' camp to sit out the remainder of the war. Undaunted, the prisoners plan one of the most ambitious escape attempts of World War II. Based on a true story.

We didn't find any linked discussions for this film. Here are the results of a quick search of possibly related threads:
14 The other Great Escape?
I saw a film that, like the Great Escape (1963), was based on the Paul Brickhill book. It was a British production with no actors I recognized. Curiously, it was made at about the same time as the f...
21 What's so great about Escape from New York (1981)?
It's often regarded as a classic, but I don't really see what's so good about it. I mean I felt the story didn't offer any surprises really. SPOILER The President offers Snake Plisken a deal, o...
0 DVD Review of Special Edition of THE GREAT ESCAPE(1963)
For some of us who enjoy WWII action films, especially prison camp escape films like STALAG 17, KING RAT or THE BRIDGE OVER THE RIVER KWAI, then John Sturges' THE GREAT ESCAPE(1963) starring an all st...
5 Snake Plissken's ''Escape from Mars'' & ''Escape from Earth''????????
I know the movie ''Ghost of Mars'' first was supposed to be the third potential ''Snake Plissken' movie'' called ''Escape from Mars''. But I have some questions about this: Was ''Escape from Mars''...