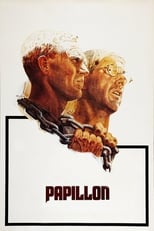 Release: Dec. 13th, 1973
Runtime: 2 hours, 31 minutes
A man befriends a fellow criminal as the two of them begin serving their sentence on a dreadful prison island, which inspires the man to plot his escape.

1 Papillon (2017)
In the movie, at the end, when Papillon is getting ready to escape by jumping in the sea, he asks Louis Dega why he doesn't want to come with him. His reply was that he wants to stay for the same reas...
4 Papillon 2017 is effin awful
Art direction and lighting looks so cheap and lazy, performances totally wooden and forced. Lazy lazy location shooting in Malta — an arid Mediterranean island standing in for the equatorial jungle w...

TheUsualSuspect I highly recommend Papillon for those looking for a great film that is acted superbly by people who show dedication to their craft.
READ REVIEW