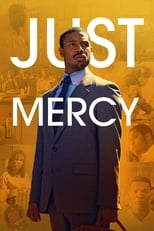 Release: Dec. 25th, 2019
Runtime: 2 hours, 16 minutes
The powerful true story of Harvard-educated lawyer Bryan Stevenson, who goes to Alabama to defend the disenfranchised and wrongly condemned — including Walter McMillian, a man sentenced to death despite evidence proving his innocence. Bryan fights tirelessly for Walter with the system stacked against them.

We didn't find any linked discussions for this film. Here are the results of a quick search of possibly related threads:
1 Love and Mercy
Okay, so I thought this was gonna be one of those Bio pics with a capital B. Where it chronicles the life of Brian Wilson from childhood and we're slowly being wheeled through every single detail and ...
1 New Movie Mercy Streets
I have heard about a new movie to be released Oct. 31 called Mercy Streets. It was filmed near where I live. It is supposed to be about twin brothers, one is an ex-con and the other is a preacher an...
1 Love and Mercy, Brian Wilson's story
Love and Mercy One of the most disturbing and strange stories in American music history has been the story of the Beach Boys and Brian Wilson. Packaged as the All-American boys from Southern Calif...

Gideon58 The story establishes Johnny D's innocence in the opening scene and we watch in horror as an innocent man actually finds himself on death row for a crime he didn't commit.
READ REVIEW