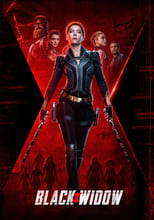 Release: Oct. 29th, 2020
Runtime: 2 hours, 14 minutes
Natasha Romanoff, also known as Black Widow, confronts the darker parts of her ledger when a dangerous conspiracy with ties to her past arises. Pursued by a force that will stop at nothing to bring her down, Natasha must deal with her history as a spy and the broken relationships left in her wake long before she became an Avenger.

Thief Unfortunately, there is little of that, and the film follows the formula of most MCU films, which is to be competent *enough*.
READ REVIEW