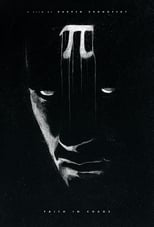 Release: Jul. 10th, 1998
Runtime: 1 hour, 24 minutes
The debut film from Darren Aronofsky in which a mathematical genius Maximilian Cohen discovers a link in the connection between numbers and reality and thus believes he can predict the future.