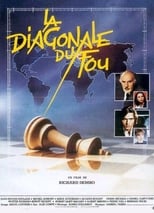 Release: Apr. 15th, 1984
Runtime: 1 hour, 50 minutes
World Chess Champion Akiva Liebskind (Michel Piccoli) faces his former pupil Pavius Fromm (Alexandre Arbatt), who defected to the West from the Soviet Union five years earlier, for the World Chess Championship in Geneva, Switzerland. The tension and strategies between the players draw parallels to the political conflicts and ideologies between East and West during the Cold War.

We didn't find any linked discussions for this film. Here are the results of a quick search of possibly related threads:
9 Girl is Followed by a Street Performer; only moves when not looking
*Updated* Scene where a girl is followed by a living statue street performer. There is a street festival going on, the main girl takes interest in a painted street performer and soon realizes the guy ...
3 Moves where the sick girl dies in the end
Possible spoiler about "Me and Earl and the Dying Girl (2015)" dont read if u didnt watch it yet. Realy wanna know some good drama movies where the sick girl dont die in the end. Just wa...
4 Moves where people run toward a kissing scene
Looking for up to 10 movies where people run toward each other, embrace as they twirl and then kiss...
14 Why do so many moves have a yellow tint nowadays?
It seems that's the case, and it seems that older movies, being remastered, are now having yellow tints added in. The new remaster of Blade Runner has a yellow tint on the final cut. The new Termi...
0 Name of a black comedy film, where a guy moves in with a crazy girl..
So there’s not much to go on, but I’d be hugely grateful if anyone can help. So it’s a black comedy where a guy moves in with a girl, and she turns out to be crazy, poops in his porridge. He buys he r...