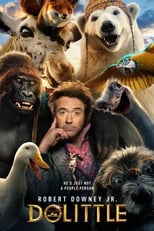 Release: Jan. 1st, 2020
Runtime: 1 hour, 41 minutes
After losing his wife seven years earlier, the eccentric Dr. John Dolittle, famed doctor and veterinarian of Queen Victoria’s England, hermits himself away behind the high walls of Dolittle Manor with only his menagerie of exotic animals for company. But when the young queen falls gravely ill, a reluctant Dolittle is forced to set sail on an epic adventure to a mythical island in search of a cure, regaining his wit and courage as he crosses old...

Gideon58 Screenwriter/director Stephen Gaughan, who won an Oscar for the screenplay to Traffic has tried to incorporate elements from both previous versions and added new layers of his own, but it doesn't really work because the entire premise of this film spits in the face of the original concept of the ch....
READ REVIEW