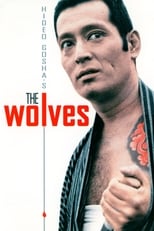 Release: Oct. 29th, 1971
Runtime: 2 hours, 11 minutes
After going to prison for killing the boss of the Kanno gang, Seji Iwahashi (Tatsuya Nakadai) gets released early -- only to find that his former gang has merged with the Kannos. But with bitter resentments lingering on both sides, how long will it be before the bloodshed begins anew? Set in 1926 Japan, this serpentine crime thriller from director Hideo Gosha also stars Toshio Kurosawa and Isao Natsuyagi as Iwahashi's closest ally.

We didn't find any linked discussions for this film. Here are the results of a quick search of possibly related threads:
3 Big Bad Wolves
New film from the directors of Rabies(the first slasher/horror film to come out of Israel). A series of brutal murders puts the lives of three men on a collision course: The father of the lat...
16 Who Dances With Wolves ?
I noticed no threads about this film. I must say its one of my alltime favorites. What other Native-americans films do you like/enjoyed/hate/love/would you compare. (I have uppermost respect for ...
8 Dances with wolves
Just rewatched what I thought was the extended version of Dances with Wolves but the ending was not what I remember from the original. In this version they left the tribe as the soldiers were closing ...
0 Raised by Wolves
"Raised by Wolves, a serialized sci-fi series from Ridley Scott, will premiere on the direct-to-consumer platform HBO Max. The announcement was made during the WarnerMedia Day investor present...
6 Le Pacte des Loups (Brotherhood of the Wolves)
Hey everyone, I don’t know about all of you, but when I watch a movie I don’t like to be sitting there wondering what time it is going to end. I need the kind of flick that will keep me on the edg...