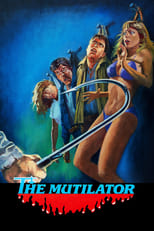 Release: Jan. 4th, 1985
Runtime: 1 hour, 26 minutes
As a child, Ed was cleaning his father’s hunting rifles (a surprise birthday treat for the old man) when one of them went off, hitting and killing his mother. On seeing the bloodshed, his father flew into a murderous rage—Ed just barely escaped with his life. Now in his teens, he returns home; he doesn’t expect to find his father, still there, waiting for a chance to settle the score . . .