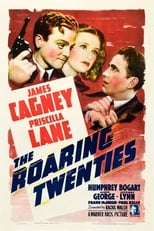 Citizen Rules In 1939 Warner Brothers studio made The Roaring Twenties a film that pays homage to the early 1930's gangster films that made Warner Brothers a household name....and made stars out of two of their actors, who were famous for playing tough guy gangsters, James Cagney and Humphrey Bogart.
READ REVIEW

pahaK A crime film about bootleggers and how the prohibition turns good men into criminals (and how war lets them befriend with bad people).
READ REVIEW