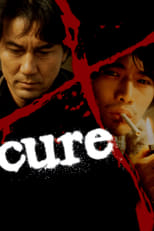 Release: Nov. 6th, 1997
Runtime: 1 hour, 51 minutes
A wave of gruesome murders is sweeping Tokyo. The only connection is a bloody X carved into the neck of each of the victims. In each case, the murderer is found near the victim and remembers nothing of the crime. Detective Takabe and psychologist Sakuma are called in to figure out the connection, but their investigation goes nowhere...

7 The Cure---a few questions
I recently saw a movie called The Cure. It was a very good movie, but I wasnt sure I understood the ending. If you arent familiar with this movie, its a story about 2 boys going on a journey for the c...
1 The Cure For Love 1949
My Grandma is 90years old and i am trying to locate a copy of the above film which would make her very happy, she has not seen it for many years and would love to see it again. She loves old movies e...
27 The cure to my depression lies within these films
I feel really down right now. My copy of Star Wars A New Hope just broke. I'm not happy with my life at the moment and am having trouble sleeping. I haven't been watching as many films lately and I th...

Iroquois I can pick apart what types of psychological crime thrillers seem to have had an influence on Cure, especially those types that go beyond their simple cat-and-mouse narratives to ask deeper questions about why the "cat" chases the "mouse" (or whether or not the "mouse" is ever so easily caught).
READ REVIEW