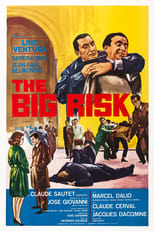 Release: Mar. 23rd, 1960
Runtime: 1 hour, 50 minutes
On crowded Milan streets, two men execute a split-second payroll heist-in broad daylight-then begin a lightning-paced getaway, via every conveyance available. But after all, when a tough guy's returning to France (where he's been sentenced to death in absentia) after holing up in Italy for nearly a decade, he's got to have some startup money--particularly if he's going back with the wife and kids.

59 High risk/reward acting
While watching there will be blood i noticed lots of camera shots lingered on ddl's face for a long time which i dont have problem with but compare that with viggo mortenson in eastern promises..one i...
5 Is Maximum Risk (1996) underrated?
I watched it again after not seeing it for a few years and it still holds up better than I expected. But this movie is never talked about and it seems so much better written than the average action...
3 'Batman Begins' Spoilers - Read at You Own Risk
Originally Posted by Aint It Cool News View Spoilers WARNING: "Batman Begins" spoilers below I walked in late to catch the last part of Ch...
17 Basic Instinct 2 Sucked: Read My Review & Lose Risk Addiction, Easily
Deleted...