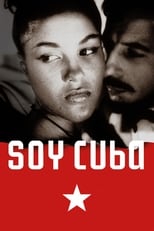 Release: Oct. 26th, 1964
Runtime: 2 hours, 20 minutes
An unabashed exercise in cinema stylistics, I Am Cuba is pro-Castro/anti-Batista rhetoric dressed up in the finest clothes. The film's four dramatic stories take place in the final days of the Batista regime; the first two illustrate the ills that led to the revolution, the third and fourth the call to arms which cut across social and economic lines.

4 Movie - Snow Dogs - Starring Cuba Gooding
In the movie Snow Dogs, does anyone know the name of the Husky dog that had the item in his tooth that was making him mean and that Gooding as the Dentist removed and he thus became his friend??...

re93animator The movie ends with beautiful rural Cuba being bombarded, while men are driven out of their serenity to take up arms.
READ REVIEW