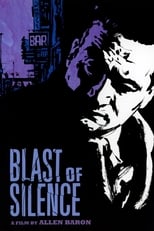 Release: Mar. 20th, 1961
Runtime: 1 hour, 17 minutes
A hired killer from Cleveland has a job to do on a second-string mob boss in New York. But a special girl from his past, and a fat gun dealer with pet rats, each gets in his way.

We didn't find any linked discussions for this film. Here are the results of a quick search of possibly related threads:
0 Arctic Blast
FAIL........... Just had the misfortune to watch what is the worst acted pile of horse dung i ever sat thru. As stated,acting is deplorable, special effects are reminicent of the 1970's or non existen...
2 Blast, Better than Die Hard?
In our latest episode, we review two Die Hard rip-off movies named "Blast". One starring Linden Ashby aka Johnny Cage and the other starring Eddie Griffin. Is it possible they are better th...
7 Anime blast
An anime cicle is taking place here in Havana City. It is an important event since it is the first time we see Japanese animation films in a movie theater. Sadly the truth is that we get to see the fi...
2 Tim & eric: Beach blast
James Quall, Beach blast ...
0 Mutant Blast, A B-movie extravaganza?
This week we take a look at MUTANT BLAST! A Troma produced a film that consists of not quite zombies, murderous rats, and jealous lobsters... but it is B-Movie glory? ...