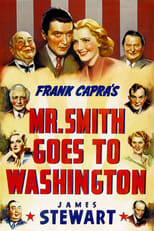 Release: Oct. 19th, 1939
Runtime: 2 hours, 9 minutes
Naive and idealistic Jefferson Smith, leader of the Boy Rangers, is appointed to the United States Senate by the puppet governor of his state. He soon discovers, upon going to Washington, many shortcomings of the political process as his earnest goal of a national boys' camp leads to a conflict with the state political boss.

We didn't find any linked discussions for this film. Here are the results of a quick search of possibly related threads:
17 Freeman vs. Washington vs. Smith
Who is the greatest African American actor of all time? Freeman: Driving Miss Daisy, Glory, Seven, Unforgiven, The Shawshank Redemption, Invictus, Million Dollar Baby Washington: Glory, Training...