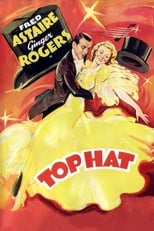 Release: Aug. 29th, 1935
Runtime: 1 hour, 41 minutes
Showman Jerry Travers is working for producer Horace Hardwick in London. Jerry demonstrates his new dance steps late one night in Horace's hotel room, much to the annoyance of sleeping Dale Tremont below. She goes upstairs to complain and the two are immediately attracted to each other. Complications arise when Dale mistakes Jerry for Horace.

Citizen Rules I'd seen Top Hat before, but it had been over a decade...My favorite number was the second dance number No Strings (I'm Fancy Free) with Fred Astaire doing a noisy tap dance in the hotel room above a slumbering Ginger.
READ REVIEW

Gideon58 An impromptu tap dance in his hotel room disturbs the rest of Dale Tremont (Rogers), a fashion model in the room below who meets Jerry and is immediately attracted to him, but through a classic case of musical comedy mistaken identity, is led to believe that Jerry is really Horace, which complicates....
READ REVIEW