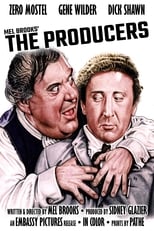 Release: Nov. 22nd, 1967
Runtime: 1 hour, 28 minutes
Broadway producer, Max Bialystock and his accountant, Leo Bloom plan to make money by charming little old ladies to invest in a production many times over what it will actually cost, and then put on a sure-fire flop, so nobody will ask for their money back – and what can be a more certain flop than a tasteless musical celebrating Hitler.

We didn't find any linked discussions for this film. Here are the results of a quick search of possibly related threads:
11 Immortals...from the producers of 300..
The visulas are super...Do you think this is going to be a hit?Probably not.What you say?...
23 Rightwing Actors / Producers
Based on quotes, rumors, etc. can you tell which Holywood actors and producers are rightwing? It might seem problematic because the right has many definitions (capitalist, conservative, hawkish...), ...
6 Best/Favorite Movie Producers?
What were their best movies, and why are they your favorite? We don't talk about them much.......
1 2015 Producers Guild Nominations
They were announced this morning, and all the results are here. Best Picture American Sniper Birdman Boyhood Foxcatcher Gone Girl The Grand Budapest Hotel The Imitation Game Nightcrawler ...
0 Who are some Hollywood producers/directors who said no to remakes?
With all these remakes coming out and a lot of them being inferior the original, sometimes I feel that the owner of the original movie sold out for money, so to speak. But are their any filmmakers ...

The Gunslinger45 I loved that movie and over the years continued to rent Mel Brooks movies from Blockbuster.
READ REVIEW

Cobpyth Another notable character was Franz Liebkind, the writer of the play, who is still a nazi at heart and wants to kill the two producers when he sees his original Hitler praising script is ruined by funny sketches.
READ REVIEW

Gideon58 A nebbish accountant named Leo Bloom, a bundle of neuroses who carries a blue security blanket a la Linus Van Pelt has been sent to Max's office to do his books and plants the idea in Max's head that he can make more money producing a Broadway flop rather than a hit by collecting more money that the....
READ REVIEW
View All (4)