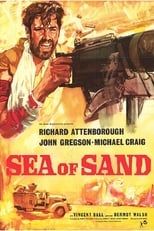 Release: Nov. 4th, 1958
Runtime: 1 hour, 37 minutes
A small British army team is sent deep behind enemy lines to destroy a German petrol dump as part of the preparation for a major attack in the North African campaign. Sea of Sand was distributed in the US in a shortened version, Desert Patrol.