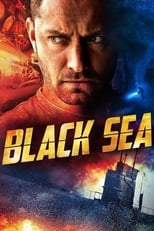 Release: Dec. 5th, 2014
Runtime: 1 hour, 55 minutes
A rogue submarine captain pulls together a misfit crew to go after a sunken treasure rumored to be lost in the depths of the Black Sea. As greed and desperation take control on-board their claustrophobic vessel, the increasing uncertainty of the mission causes the men to turn on each other to fight for their own survival.

Fabulous In order to make good with his former employers, a submarine captain takes a job with a shadowy backer to search the depths of the Black Sea for a submarine rumoured to be loaded with gold.
READ REVIEW

Citizen Rules There has been a lot of fine films made about submarines and their crews, but Black Sea ain't one of them.
READ REVIEW
View All (4)