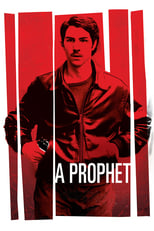 Release: Aug. 26th, 2009
Runtime: 2 hours, 35 minutes
Sentenced to six years in prison, Malik El Djebena is alone in the world and can neither read nor write. On his arrival at the prison, he seems younger and more brittle than the others detained there. At once he falls under the sway of a group of Corsicans who enforce their rule in the prison. As the 'missions' go by, he toughens himself and wins the confidence of the Corsican group.

We didn't find any linked discussions for this film. Here are the results of a quick search of possibly related threads:
2 A Prophet
I saw this film recently (A Prophet 2009) and have to say it is one of the best films I have seen. I mentioned this to a friend and he asked me, why? I proceeded to tell him about the narrative and...
3 Review: A Prophet (Un Prophčte)
Niels Arestrup. Tahar Rahim. Jacques Audiard. These are not very resounding names in the movie industry. Rahim is nearly a complete stranger with only 3 acting jobs onto his account. You may have seen...
1 Prophet film adaptation
"Studio 8 is hoping to build the next comic book franchise with Prophet. The studio has acquired the rights to Prophet, a property Deadpool creator Rob Liefeld first introduced in 1992. In...