The White Sun of the Desert 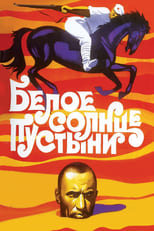 Release: Mar. 30th, 1970
Runtime: 1 hour, 23 minutes
The setting is the east shore of the Caspian Sea (today's Turkmenistan) where the Red Army soldier Fyodor Sukhov has been fighting the Civil War in Russian Asia for a number of years. After being hospitalised and then demobbed, he sets off home to join his wife, only to be caught up in a desert fight between a Red Army cavalry unit and Basmachi guerrillas. The cavalry unit commander, Rahimov, "convinces" Sukhov to help, temporarily, with the...