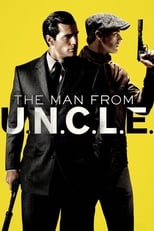 Release: Aug. 13th, 2015
Runtime: 1 hour, 56 minutes
At the height of the Cold War, a mysterious criminal organization plans to use nuclear weapons and technology to upset the fragile balance of power between the United States and Soviet Union. CIA agent Napoleon Solo and KGB agent Illya Kuryakin are forced to put aside their hostilities and work together to stop the evildoers in their tracks. The duo's only lead is the daughter of a missing German scientist, whom they must find soon to prevent a...

TheUsualSuspect With James Bond, Ethan Hunt and even Melissa McCarthys Spy crowding the theatre, how is one spy film supposed to stand out.
READ REVIEW

skizzerflake Oh, and by the way, in a major blooper, the cast keeps referring to the plans for the bomb as being on a computer disk, while its plainly visible that the object being referred to is a tape reel, but, Im guessing that the writers assumed that younger viewers would not know what a tape reel is.right.
READ REVIEW

Evan_Wheatley As the story progresses however, there are moments where the film takes itself too seriously and the action is filmed differently to appeal to a modern audience.
READ REVIEW
View All (4)