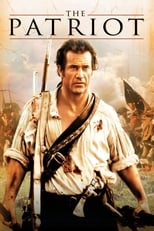 Release: Jun. 28th, 2000
Runtime: 2 hours, 45 minutes
After proving himself on the field of battle in the French and Indian War, Benjamin Martin wants nothing more to do with such things, preferring the simple life of a farmer. But when his son Gabriel enlists in the army to defend their new nation, America, against the British, Benjamin reluctantly returns to his old life to protect his son.

23 The Patriot
Ok, I thought this movie sucked big time. But, I'm just posting this because I think it would have been cool. When Mel Gibson is running with the american flag towards the bad guy on the horse at the ...
33 POLL: Gladiator versus The Patriot
OK. It's Russell Crowe versus Mel Gibson. Which of these Y2K epics did you like better?...

The Gnat What I dislike about the setting of this film is that it falls into the, again, predictable category of eras for a film of this genre.
READ REVIEW